As I walked the streets of Vienna, I couldn’t help but realise something; (well…aside from the gorgeous architectural heritage sprawled out on every block, and the cheery friendly folk inhabiting the bustling pavements!) No, instead what gripped me more intensely was something a lot less in your face – something that passes you by quite easily, but once you notice it – you cannot stop seeing it…Vienna is very clean, well maintained – which is great and everything, but it appears that rules are followed completely by just about everyone. I have probably lost you there, why is this a bad thing you may ask? So let me explain…the reason this struck me as unusual is that it all felt a little…well…forced. Yes, yes, people were following the rules but it was to the letter! Perhaps I am a hoodlum and I don’t even realise it, but it all made me a little uncomfortable at times.

It reminded me of a programme I used to watch as a kid – The Demon Headmaster; where the crazy head of the school would take off his glasses and hypnotise the kids into doing his will…sounds super, super paedo crazy these days I know, but it was a different climate, and the innocent child’s mind doesn’t see it that way. Anyway so in the show the afflicted kids would walk around in a daze just obeying orders, when I saw that crowds of people were standing at the pedestrian stop sign despite the fact that there was not a single vehicle in sight, it made me sure that there was something in the water here, or there was a hypnotism feature built into the Austrian television. It was the only theory that made sense to me.

Of course my brother and I didn’t have the same problem, we simply assessed the situation and crossed the road – after all, we were drinking bottled water (ahem…okay, okay…I mean beer) and were only watching streamed episodes of our favourite comedy shows on my laptop. So we were safe! Coming to think of it that’s probably a top travel tip, so perhaps you ought to write it down? Just a thought.

You’ve probably already guessed that this policy of ours ended up badly.

On one ill-fated occasion we stopped at the end of the pavement for the red man – just as the rest of the drone population did, we looked right, then left – then repeated – feel free to compliment me on my road safety skills, cheers! – we subsequently came to a conclusion it was safe to cross due to there being NO traffic whatsoever and, well…did so!

“WAAHHHHHH-WAHHHHH!” a bizarre screeching sound rang out behind me once I had reached the middle of the small road – I turned around slightly in shock, and in my peripheral vision saw a plump lady dressed in a strange outfit, still screaming and gyrating wildly – naturally I took her to be an absolute mental case, so quickly rushed myself over to safety! Phew!

“Fucking pigs!” my brother joked under his breath,

“What?” I chuckled, vaguely confused,

We continued walking as he explained that the high pitched noise had been two policewomen who had probably been kicking off about crossing the road on a red man – we shrugged in a ah well no big deal kinda way, and went back to the map, we were lost – that’s for sure – but we didn’t really care much, we had ate a huge lunch and a few…err…bottles of water, so we were happy to just wander about aimlessly…we got to the next block and stopped at the red man signal – this time around he was right, the road was impassible as cars streamed wildly in and out, honking as they went.

“Erm, hi?” I replied – to the two extremely pissed off ladies standing next to me,

“SHLURGUNN-SHLURGUNN-SHLOOZHLE, SHLIGINN…” one of them was blabbering away some total nonsense with aggressive vigor, as the other stood arms crossed, intermittently nodding in agreement.

“We don’t understand you, sorry, we-” my brother began,

“OH, O-KAY. YOU RUNNING AND LAUGHING!” she blurted out, red in the face with emotion,

“No…no…” I almost giggled at the thought of being apprehended for laughing, but held myself together…”I didn’t run or laugh, I would never do tha -”

“YES!” interrupted the other one – “YOU LOOKED AROUND! SAW US STANDING! LAUGHED! THEN LOOKED AGAIN! LAUGHED AGAIN! THEN WITH THE RUNNING AWAY! YES!”

Oh my goodness! I really was a menace, somebody stop me!

I glanced at my brother uneasily, glaring with wide eyes – we were both sporting the standard ruby coloured Taggart cheeks – as per usual in awkward situations such as these! I tried to plead my innocence but it was a lost cause, she had fabricated some story blatantly: I mean do I look like the kind of guy who would laugh? Or run? Or even worse, do them both together? Of course not.

“WHAT?!” my brother exclaimed,

“YES YOU CAN! IF YOU WANT TO CROSS, YOU…YOU’RE NOT ALLOWED TO CROSS THE ROAD, REALLY?”

“WELL IT’S A RIDICULOUS RULE!” he replied defiantly, “yes, yes! It may be a ridiculous rule – but it is the rule, so we have to follow it!” Urgh, what a great mentality to have…I glanced down at my feet because I wasn’t sure where to look, and became aware of the sympathetic stares from the other drone members of the public – which appeared to range from sympathetic looks to shakes of the head…I bet this shit happens all the time, I mean it should be an unofficial rule that if someone looks clueless and has a map in their hand there should be some form of leniency! My brother was going off on one, but despite the fact I was pissed off, I had sudden flashbacks to documentaries about young guys being locked up for years in foreign parts for some bogus crimes, and as we had a plane to catch the next day, I couldn’t see how this would fit into our itinerary:

I grabbed my wallet and sniffled as I counted out fifty Euros, my brother muttered that he had barely any money left – “HE HAS FIFTY SO HE PAYS.” Of course, of course I do. As I handed over the money I felt my blood pressure rise and every vein in my eyeballs throb – “so where does this money go?” my brother began to inquire, “IT GOES TO US – THEN WE TAKE IT TO THE BUILDING AND YES!” So basically straight in their back pocket then. Fantastic! They began to fill out some little ticket sheet, didn’t once ask for names or any form of ID, or well…anything…just took the money and then that was that. 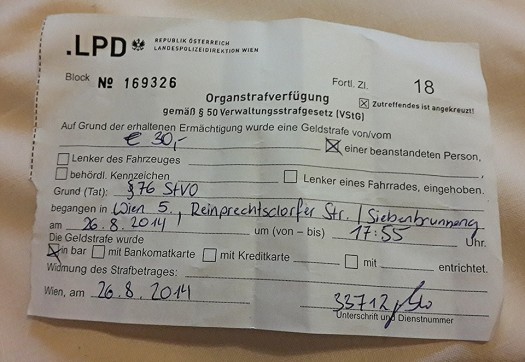 We began to walk off down the street (rather than crossing like we had originally planned), just to get away from them – but they followed, we quickened our pace to try and escape – but they stayed with us, largely because we had to be sure to stop and wait for the green man at every crossing. Eventually we looped around and made a break for it, eventually getting back to the hotel where I could top my wallet back up from my stash.

“Fucking ridiculous that!” my brother would repeat, over and over, “THIRTY EUROS?! Fucking ridiculous that!” I would nod and agree, shedding a private tear at paying FIFTY Euros for the privilege of crossing the road when my own brain told me I should. I was also a little irked that someone who had paid ten Euros was being more vocal in outrage than myself…perhaps he had forgotten…I should remind him…nahhh, save that for a rainy day – bank that gold for an argument in the future.

More from this country below:

51 Replies to “Anything but Fine (Austria)”