If you are a person who is deserving of friends and life in general then you probably love The Lord of the Rings. If you don’t then you are likely the person at parties who people try to avoid; and/or you enjoy boring said people to death by talking about different types of cling-film and the different uses it can provide.. It appears obvious to suggest this but please seek professional help – you are a certified creepozoid.

Thankfully I am not one of these people. In fact I am entirely enchanted by the world of LOTR...it certainly seems a lot better than the real world, a place jam-packed with subway maps, timetables, and mortgage payment plans. I mean why would a person want to live in an apartment building when they could live in a Hobbit hole? Why would you fly with Easy Jet when you could ride on a Great Eagle? Why would…well the list goes on; and every question is as necessary as it is ridiculous. Call it market research or perhaps just fan-boy admiration but I had to go and look at Tolkien’s world for myself.

And so I headed to New Zealand to live out this little dream: AND WHEN I SAY LITTLE DREAM, I MEAN HUGE.

Once I’d arrived in Auckland I noticed straight away how polite and friendly people were; they would say things with a smile, would engage in humorous conversation with total strangers, and give help without any expectation of anything in return. Lovely. They were not however Hobbits…they weren’t even elves for that matter, and this was most disappointing. They were just plain old men, who I had learned from the trifecta of books, films, and Top-Trumps cards, are the most susceptible to the ring’s powers and not to be trusted. They make great burgers though, so that’s one pretty decent bonus. 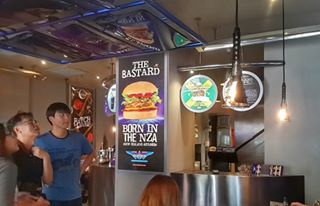 I decided to look further afield – and booked a day tour to Hobbiton; the land of Bilbo Baggins, The Green Dragon Pub, and the pitter-patter of countless hairy feet (hopefully).

The landscape during the journey was breathtaking. Despite the stranger next to me not sharing the arm rest, and the faint wiff of egg constantly stinging my nostrils I don’t think I have ever enjoyed a ride in a bus as much. There were rolling green hills as far as my eyes could see, deep blue skies strewn with powerful clouds, and flashes of wildlife which I had never seen before (no, not dragons). It actually reminded me of home, of England…aside from the palm trees of course.

Once I got there I was overcome with excitement, and so were the other members of the group – half of which confessed they had never seen or read The Lord of the Rings…this surprised me but I worked out rather quickly they must be under the hold of some sort of enchantment. Perhaps born from magic, but more likely the effect of the wonderful luscious hills of New Zealand they had witnessed on the way over here. But that wasn’t to be the end of the day’s spectacles…

We spent the day winding through the pathways of Hobbiton, hearing amusing and surprising little factoids from the lovely tour guide:

“…many of the supporting cast in Hobbiton were just the cast member’s children, who were staying here anyway during the filming…”

“…there are actually no Hobbits. They are not real. John please, stop asking…wait…stop crying…please!”

Wasn’t a huge fan of that last one. But after the extensive tour, and many many photos to document the once in a lifetime experience… 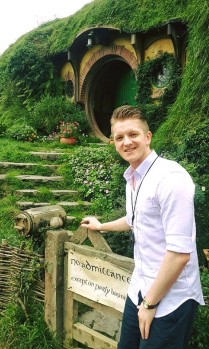 …we retired to the Green Dragon Pub; the famous haunt of Frodo, Sam, Pippin and Merry.  This was fortunate timing as the heavens had just begun to open, and soon the muddy pathways would become sludge – so off we scurried as fast as we could, all the way to the inviting warmth of the pub’s wood fire. Here we were told that due to it being “Good Friday” they were not allowed to sell us the lovely amber ale and dark stout…what exactly was good about that totally escapes me, but it was with a sigh of relief that I then heard we would be given one for free. Technically they are not selling it, so perhaps that is okay. She didn’t sound sure, but I couldn’t have cared less and grabbed it before she changed her mind!

On the way back to the city I popped in my tunes (The Lord of the Rings’ soundtrack as planned) and took pleasure in the beautiful scenery once more, which was now a fiery orange sky as the impending night battled with what was left of the day. It had been everything I had wanted*, and more…and there was a joy to finally doing something which I had dreamed about for so long.

Actually I say everything, but I would have certainly loved to see some Hobbits. So it’s more like “everything I had wanted, but less.” Despite this it was absolutely spectacular, and if you ever get the chance, GO!